Turning (back) to linguistics 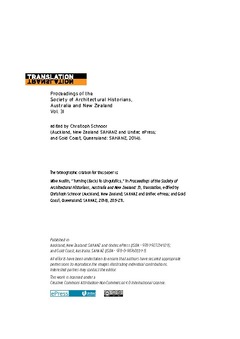 Linguistic analogies applied to architecture are currently not popular, but the conference theme evokes language and this paper uses the linguistic analogy in the hope that it might yield some insights into the difficult question of the relation between Western architecture and the indigenous. A fundamental analytic tool used by linguists is the separation of meaning from structure. For example so-called pidgin languages are usually regarded as crude, primitive and hardly worth calling languages. The speakers on the other hand point out that they have consistent and logical grammatical structures, which derive from the indigenous language, but use adopted and modified European words. That is to say that the syntax is indigenous but the semantic overlay is Western. The language trees constructed by linguists are based on the observation that the syntactic dimension of languages persists over time, while the semantic dimension changes much more rapidly. This paper attempts to look at cross-cultural architecture using the language analogy. The translation and use of indigenous motifs in western architecture is associated with various difficulties and problems. Indigenous builders on the other hand are endlessly adopting western architectural forms into their buildings. Translation is associated with notions of loss, but there are also gains in translation. Some well known local buildings are discussed in an attempt to demonstrate the analogy while a question remains as to whether style can be translated.

Proceedings of the Society of Architectural Historians, Australia and New Zealand: 31, Translation, edited by Christoph Schnoor is licensed under a Creative Commons AttributionNonCommercial 4.0 International License