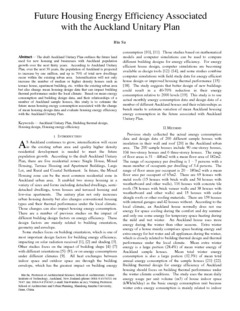 The draft Auckland Unitary Plan outlines the future land used for new housing and businesses with Auckland population growth over the next thirty years. According to Auckland Unitary Plan, over the next 30 years, the population of Auckland is projected to increase by one million, and up to 70% of total new dwellings occur within the existing urban area. Intensification will not only increase the number of median or higher density houses such as terrace house, apartment building, etc. within the existing urban area but also change mean housing design data that can impact building thermal performance under the local climate. Based on mean energy consumption and building design data, and their relationships of a number of Auckland sample houses, this study is to estimate the future mean housing energy consumption associated with the change of mean housing design data and evaluate housing energy efficiency with the Auckland Unitary Plan.