Between Werkbund and wartime sobriety : Ernst Plischke‘s Designs for Orakei 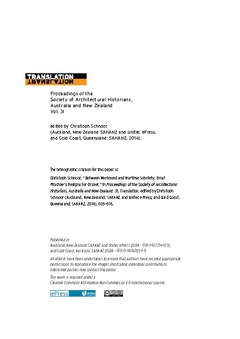 The first project that Ernst Plischke was entrusted with in the Department of Housing Construction after his arrival in Wellington in 1939 was a series of multi-unit buildings in Orakei, Auckland. He based their design directly on the pair of small semi-detached houses he had been able to contribute to the Werkbund settlement in Vienna in 1932 – one of the last public attempts in Vienna to promote modernist architecture before the war. Plischke’s houses in their Werkbund exhibition context in Vienna offer themselves for comparison: 32 architects had taken part in this “Manifesto of the new dwelling”, as a recent publication of the Wien Museum calls it. These houses form the best possible starting point of investigating issues of translation in Plischke’s work between Austria and New Zealand. Although the Werkbund exhibition in Vienna had already been situated in a climate of sobriety, and Plischke’s houses had not covered more than 67sqm per dwelling, his designs in Auckland were reduced even further before realization, particularly in terms of fittings and furnishings. Having been asked by Gordon Wilson to design the Orakei units in the shortest possible time, it was clear that he would rely on previous designs and would thus transfer his design ideas directly from Vienna into his new field of activity. This paper investigates the historiographic aspects of this design transfer against Plischke’s own architectural convictions, making use of archival material alongside secondary sources from Austria and New Zealand. The paper further investigates the reasons for the changes, suggesting that the project confronted him with the different situation regarding building methods, planning tradition and wartime austerity, and thus framed the way in which Plischke directed the adaptation of his architecture to the New Zealand conditions.

This work is licensed under a Creative Commons Attribution-NonCommercial 4.0 International License