Therapy in translation : landscape Ideas from the Whau Lunatic Asylum and Unitec Campus. 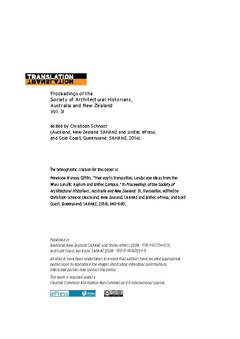 As noted by Julian Raxworthy,1 landscape architecture is different from other design discourses, notably architecture, because of its utilisation of ‘dynamic’ construction media such as plant materials, soils and water, compared with the ‘static’ materials of architecture, colloquially described as bricks and mortar. This dynamic of plant growth and performative ecological processes leads to representation of change over time in any landscape. The psychological benefits of gardens and landscape have been well documented. 2 The Unitec landscape is a field of remnants and features remaining from the days of the psychiatric hospital, such as the trees, landform modifications, productive gardens, and orientation to views. Along with historical photographs and texts the landscape reveals evidence of therapeutic intent in the design of the hospital grounds.3 This paper investigates how the therapeutic landscape of the 19th century can now itself be considered to be under therapy. 1 Julian Raxworthy, “Writing Gardens – Gardening Drawings: Fung, Bruier and Gardening as a Model of Landscape Architectural Practice,” in Landscape Review Special Issue: CELA 2001: Here and There? (Christchurch, Canterbury: Lincoln University Press, 2004), 196–200. 2 Diane Relf, ed., The Role of Horticulture in Human Well-Being and Social Development (Portland: Timber Press, 1992); Rachel Kaplan, “The Psychological Benefits of Nearby Nature,” in The Role of Horticulture in Human Well-Being and Social Development, ed. Diane Relf (Portland, Oregon: Timber Press, 1992) 3 Jeremy Treadwell, “Therapeutic Landscapes,” in Society of Architectural Historians Australia and New Zealand 15th Annual Conference (Melbourne: Society of Architectural Historians Australia and New Zealand, 1998).