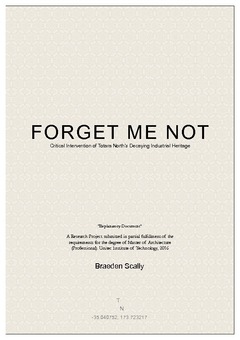 Scally, B. (2016) Forget me not : Critical intervention of Tōtara North’s decaying industrial heritage. Explanatory document. An unpublished research project submitted in partial fulfillment of the requirements for the degree of Master of Architecture (Professional), Unitec Institute of Technology.

This research project is a design-led investigation into how the people of Tōtara North could engage with their town’s forgotten industrial heritage while moving into the 21st century. Situated on the shores of the remote coastal town, the now derelict Lane & Brown Timber Mill and Shipbuilding Yard is the last standing example of a once functioning kauri timber mill. With the first change in ownership in over a century in 2004, the township’s industrial heritage is disintegrating back into the ground where kauri once grew. In the past, the native forests provided a connection between the people of the town and their relationship to the place. The resulting disjunction has led to an uncertain future for the occupants and their once globally significant industrial heritage. This project aims to stop this negative cycle and rejuvenate the industrial nature of the site whilst also providing people with a reason to stay. Informed by the past industrial process, which connected land and sea, the new programme seeks to reverse the path of production, from sea to land, reviving the past whilst also exploring alternative methods for future development. Through the dredging of the harbour’s excessive silt build up, a case for manufacturing adobe mud brick and a research centre for alternative earth construction is proposed, repurposing the kauri sediment from the seabed in order to construct a new future for the people of Tōtara North. The project questions the fate of our small historic towns, investigating the role of the architect and of heritage conservation in this context. Through an understanding of both tangible and intangible heritage, the reimagined sheds explore the design potential for representing heritage based upon three initiatives: building the stories, provoking unique intervention, and repurposing the past. Each initiative entails a response to the site at both macro and micro scales, extending past barriers and constraints of the norm to inspire the people, re-establishing their identity and connection to the heritage of the place. As a result, the local people and the wider public are able to dynamically engage with their past.