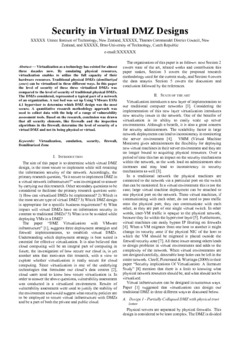 Virtualization as a technology has existed for almost three decades now. By emulating physical resources, virtualization enables to utilize the full capacity of their hardware resources. Traditional physical DMZs (demilitarized zones) can be virtualized in three different ways. In this paper, the level of security of these three virtualized DMZs was compared to the level of security of traditional physical DMZs. The DMZs considered, represented a typical part of a network of an organization. A test bed was set up Using VMware ESXi 4.1 hypervisor to determine which DMZ design was the most secure. A quantitative research methodology approach was used to collect data with the help of a range of vulnerability assessment tools. Based on the research, the conclusion was drawn that all security elements, like firewalls and the inspection algorithms in the firewall, determine the level of security of a virtual DMZ and not its being physical or virtual.