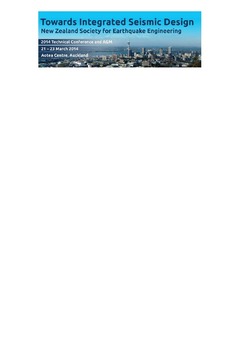 The use of rigid engineered timber panels, such as cross-laminated-timber, in construction is increasing around the world, particularly in Europe and Australasia. Typically the panels rely on nailed or screwed steel plates for hold-downs and shear keys. However, this can mean the level of ductility is difficult to quantify. Furthermore ductile wall behaviour will inevitably be associated with permanent damage to the connections. There have been calls from designers for a solution in which the level of ductility can be predicted and achieved with confidence. The authors propose a novel, yet simple, slipfriction device that limits activated forces on a structure during an earthquake by allowing it to slightly rock. An experimental LVL wall was fitted with these devices acting as hold-downs. The shear key consisted of steel rods bearing against upright steel plates along the base of the wall. Under cyclic displacement tests, the wall demonstrated excellent elasto-plastic behaviour. The predicted wall strength from theory, matched, in general, the forces measured, while ductility levels can be as large as the designer desires, within obvious limits. Even under only self-weight, the wall readily descended at one end, while uplifting at the other. The results suggest that structures of engineered lumber can perform with reliable levels of ductility and remain free from damage.