The convergence of sport marketing and sport development : addressing declining participation in a changing environment. A case study of Auckland Cricket Association. 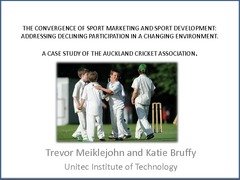 Environmental changes such as commercialism, advances in technology and increased competition have significantly influenced the way organisations operate. In particular, firms have to strategically adapt and match their internal capabilities to the environment in order to survive and succeed (Hoye & Francis, 2006, Hoye, Smith, Nicolson, Stewart & Westerbeck, 2012). Sport organisations are not immune to such environmental change and the quest to remain relevant in the current climate is potentially more challenging than ever. Sport New Zealand (New Zealand’s national sport governing body) reflects this thinking when they pose a question to readers of their young people’s survey: “Generations change. So what is the future of sport and recreation in New Zealand - rugby and netball? Or snowboarding and surfing? Something else entirely?” (Sport NZ, 2014). This research adopts a case study approach and highlights a Regional Sport Organisation (RSO), Auckland Cricket Association that is responsible for governing the history rich sport of cricket in New Zealand’s largest city (Auckland Cricket Association, 2014). Confronted with significant environmental change, coupled with changing consumer demands and lifestyles, this organisation has been forced to adapt their product portfolio with the introduction of a modified version of the game in order to address rapidly declining participation numbers. In recent years numbers have decreased by 19% at junior level, and 22% at secondary school level (Auckland Cricket Association, 2014). Semi structured interviews with relevant Auckland Cricket Association staff were conducted in order to better understand the environmental challenges they face, plus the goals, design and delivery of the new modified product. In summary, this organisation admits to trying to swim against the current of environmental change for too long and in doing so their traditional product offering is losing appeal and relevance within the marketplace. This research is important as it depicts how a large well established sport organisation is adapting to keep its sport viable in the face of such change via a combination of sport marketing and sport development strategies. It draws on sport marketing principles linked to product management and in particular focusses on the product lifecycle, product development, and product line extensions (Dean, 1950; Kotler & Armstrong; 2006; Shilbury, Westerbeek, Quick, Funk & Karg, 2014). From a sport development perspective, this study has potential to expand sport delivery models (Shilbury, Sotiriadou, & Green, 2008; Warner, Chalip, & Woolf, 2008) as it presents an additional pathway option that aims to not only grow participation but also build lifelong fans. This study will therefore contribute to the sport management knowledge base as it considers sport participation in a broader context than the traditional sport development pathway participation in a broader context than the traditional sport development pathway and also provides insights into the product development strategy of a sport organisation.