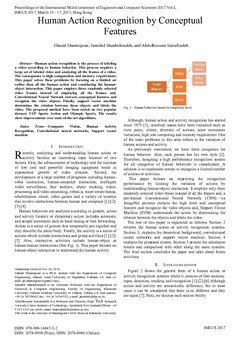 Human action recognition is the process of labeling a video according to human behavior. This process requires a large set of labeled video and analyzing all the frames of a video. The consequence is high computation and memory requirement. This paper solves these problems by focusing on a limited set rather than all the human action and considering the human-object interaction. This paper employs three randomly selected video frames instead of employing all the frames and, Convolutional Neural Network extracts conceptual features and recognize the video objects. Finally, support vector machine determines the relation between these objects and labels the video. The proposed method have been tested on two popular datasets ; UCF Sports Action and Olympic Sports. The results show improvements over state-of-the-art algorithms. This work is the outcome of Shamsipour's M.Sc thesis at Kharazmi University.