The transnational matai and the foreign homeland : does the Toloa still return to the water? 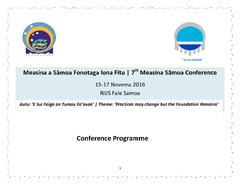 The matai and the fanua are explicitly interconnected. The matai not only get their mandate to rule from their aiga, but also from the land to which their aiga and title belong. At the bestowal of their matai title, the new recipient inherits not only a name, but also the land on which their maota or laoa stands. This land becomes their official residence. The adjacent and connecting lands becomes their domain, over which they have complete authority. They command the land and adjoining sea to be farmed and fished, and in times of drought and food shortage, they place tapu over the land, forbidding the consumption of crops and resources allowing it to be replenished. From the day of their bestowal, the matai resides on his/her land, and upon their death, their body returns to the land. The matai is therefore one with the land and vice versa. The above paragraph describes a relationship and a connection between the matai and the land that is strong and harmonious, however the reality is that in today’s world, that connection between the matai and the land as strong as we expect it to be. The primary objective of this paper is to examine whether the transnational Samoan matai still has a connection with customary and family land back in Samoa, and whether such connection eventually leads to a permanent return to the homeland for the transnational matai. According to the popular Samoan saying, “E lele le toloa, ae ma’au lava I le vai” - A wild duck may fly away, but will always return to its habitat, the swamp – alluding to the ideal that when Samoans leave the homeland, they usually return at some later point in time. This paper asks whether transnational matai actually return to the homeland, hence thesubtitle, “Does the Toloa still return to the water?” To what extent are Samoan matai living away from the homeland returning to reconnect with their lands, villages and homeland?