Online media and the emergence of young Vietnamese citizens as environmental activists. A case study of the ‘Save Son Doong’ Movement 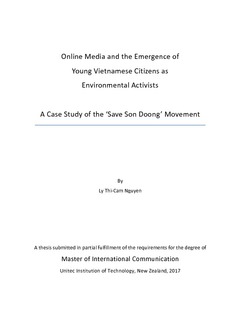 Nguyen, L. T-C. Online media and the emergence of young Vietnamese citizens as environmental activists. A case study of the ‘Save Son Doong’ Movement. An unpublished thesis submitted in partial fulfillment of the requirements for the degree of Master of International Communication, Unitec Institution of Technology, New Zealand.

Various youth initiated grassroots environmental campaigns have emerged within Vietnam’s complicated political and media context over the past few years. This raises questions regarding how Vietnamese youth have taken advantage of the Internet to protect the environment. Guided by the research question “How do young Vietnamese citizens use online media for environmental activism?” and using the ‘Save Son Doong’ movement as the case study, this research evaluates the effort of the ‘Save Son Doong’ activists in using online media to run the movement. This research also generally explores the opportunities and challenges for grassroots groups to run environmental movements in the Vietnamese context. In-depth individual interviews and a focus group with the ‘Save Son Doong’ activists were employed as the main data collection methods. Content mapping and content analysis were also applied in order to produce a comprehensive assessment of the movement activities. Research findings indicate that young, highly educated and tech-savvy activists have been very diligent in taking advantage of the Internet to circumvent the state-controlled mainstream media system and lack of resources to run the ‘Save Son Doong’ movement. By employing online media to organize advocacy activities (petitioning, media advocacy and obtaining endorsement from well-known people), social mobilization activities (building coalition and mobilizing resources) and public will campaigns, they succeeded in raising public awareness, provoking public discourse about the issue, stimulating the mainstream media into massively covering the story and pressuring the decision makers into responding to the matter. However, their weak-tie connections, as well as the shortage of finance and human resources, are reasons for the unsustainability of the movement. It is recommended that the ‘Save Son Doong’ working group consider institutionalising their organisation. The ‘Save Son Doong’ movement has become an inspiration for other online grassroots movements to emerge in Vietnam. However, activists will most likely encounter some obstacles including hacking, the digital divide, state cyber surveillance or the illegitimacy of online activism in Vietnam. The research’s focus has been on discovering the ‘Save Son Doong’ activists’ methods and perceptions of online activism. An evaluation of the impact of the movement from the perspective(s) of the public audience, as well as the mainstream media, would be helpful, as it will provide a more objective view of how effectively the activists have used online media in this movement. Future research can also expand on this topic by scaling up the case study, or by adopting a quantitative method that supplies scholars and activists with a broader view of the Vietnamese context of citizen online activism in general, and grassroots environmental activism in particular.

160605 Environmental Politics, 160606 Government and Politics of Asia and the Pacific, 200102 Communication Technology and Digital Media Studies