Collaboration and the Poutasi Project : it takes a village to create a documentary film 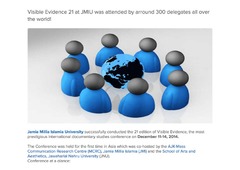 The South Pacific has a long history of colonisers and outsiders imposing their own projections and viewpoints upon the different island nations, rather than seeking a perspective that is authentically engaged with the culture, philosophies, and experiences of the inhabitants. Whether it be Paul Gauguin’s projection of desire upon the Tahitian landscape and its women, painting an erotic imaginary for the French bourgeoisie and its Parisian salons, or an Australian tourist snapping a photo of the staff at the hotel where she’s been staying and loudly requesting “a real Samoan smile”, representations run the risk of being misinformed outsider perceptions, rather than a valid internal voice. This was one of the quandaries facing a team of lecturers from Unitec New Zealand - a polytechnic in Auckland - in creating a short documentary that chronicles the rebuilding efforts of Poutasi village, Samoa, in the wake of the 2009 tsunami and the 2013 cyclone. A range of people, both Samoan and Palagi (European), have contributed to the rebuild, and it was important that their contributions be acknowledged, while at the same time incorporating a filmmaking procedure that is respectful of Samoan ethics and philosophies. Such a respect would hopefully express a dynamic and experience that emanates from within the village and its residents, rather than just communicate observations from an objective distance.