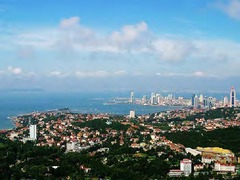 The Shandong Peninsula Megaregion (SPM) is located in China’s eastern coastal area between the Yangtze River Delta and Beijing-Tianjin-Hebei Megaregions. To understand its status of development in the national context, this paper assesses its competitive ability through a comparison with 20 megaregions nationwide. Using a principal components analysis of time and space dimensions, the authors proposed an evaluation system which included 28 indices. Findings from this research show that the overall competitiveness of SPM ranked 4th, whilst its per capita competitiveness ranked only 10th in 2013. In addition, the overall competitiveness ranking of SPM had not changed from 2005 50 2013, but its pace of economic development and investment had slowed down. Not only was this pace slower than megaregions in middle and western China, it was significantly slower that the top three megaregions nationally. The authors concluded by suggesting transformation, innovation and cooperation strategies for the future development.