The effect of osteopathic manual therapy with breathing retraining on dysfunctional breathing and exercise economy : a randomised controlled trial 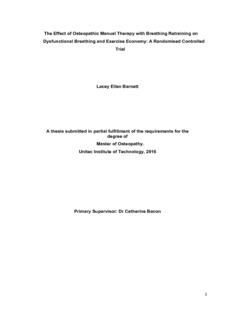 Barnett, L.E. (2016). The Effect of Osteopathic Manual Therapy with Breathing Retraining on Dysfunctional Breathing and Exercise Economy: A Randomised Controlled Trial. A thesis submitted in partial fulfillment of the requirements for the degree of Master of Osteopathy. Unitec Institute of Technology, New Zealand.

BACKGROUND: Dysfunctional breathing patterns during exercise can result in a tachypnoeic breathing pattern, expiratory flow limitation and dynamic hyperinflation. These factors can increase the work and metabolic cost of breathing, decreasing exercise economy and potentially performance. Breathing pattern retraining and osteopathic manual therapy aim to optimize breathing mechanics by decreasing the work of breathing. To date no studies have investigated the effects of breathing pattern retraining and osteopathic manual therapy on exercise economy in trained individuals. PURPOSE: The aim of the present study was to investigate the effect of breathing retraining and osteopathic manual therapy on exercise economy during a 20-minute submaximal cycling bout. Secondary aims of this study included investigating the effect of the intervention on lung function and dysfunctional breathing symptoms and behaviours at rest, and on breathing rate, perceived exertion and heart rate during exercise. METHOD: Fourteen healthy trained individuals were randomly assigned to either an immediate start group (received intervention immediately, N = 8) or delayed start group (received intervention after a six-week delay, N = 6). Oxygen consumption (VO2), Borg rating of perceived exertion, breathing rate and heart rate response during 20 minutes incremental cycling, with steady state bouts performed at 30, 40, 55 and 70% of VO2 maximum, were assessed before and after the intervention. Both groups underwent six weeks of standardised breathing pattern retraining and semi-standardised osteopathic manual therapy aimed at optimising respiratory mechanics. RESULTS: Analysis of the entire cohort (both groups) showed a significant reduction in VO2 from pre- to post- intervention at 30% (1370 ± SD 414 vs 1271 ± 307), 40% (1762 ± 503 vs 1681 ± 393), 55% (2505 ± 637 vs 2322 ± 508) and 70% VO2 maximum (3053 ± 1130 vs 2370 ± 1397). Additionally, breathing rate at each exercise intensity decreased following intervention (30%, 22.1 ± 3.97 vs 18.5 ± 5.23; 40%, 21.9 ± 3.35 vs 18.5 ± 5.54; 55%, 25.4 ± 3.53 vs 22.9 ± 4.28; 70%, 30.5 ± 10.59 vs 25.7 ± 11.71) and heart rate was also lower at each intensity, but failed to reach statistical significance. No significant changes were observed in Borg Ratings of Perceived Exertion at 9, 14 or 19 minutes into the protocol, nor in resting SEBQ, NQ, PFR, FEV1, FVC or BHT. Conclusion: These results provide evidence that optimising respiratory mechanics using breathing retraining and osteopathic manual therapy can decrease the metabolic demand of exercise at set submaximal intensities. Additionally, these results suggest that breathing rate can be optimised to exhibit greater efficiency.