Engaging Pacific In the mainstream 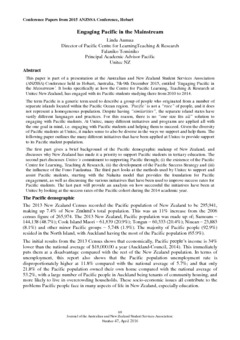 This paper is part of a presentation at the Australian and New Zealand Student Services Association (ANZSSA) Conference held in Hobart, Australia, 7th-9th December 2015, entitled ‘Engaging Pacific in the Mainstream’. It looks specifically at how the Centre for Pacific Learning, Teaching & Research at Unitec New Zealand, has engaged with its Pacific students studying there from 2010 to 2014. The term Pacific is a generic term used to describe a group of people who originated from a number of separate islands located within the Pacific Ocean region. ‘Pacific’ is not a “race” of people, and it does not represent a homogeneous population. Despite having “similarities”, the separate island states have vastly different languages and practices. For this reason, there is no “one size fits all” solution to engaging with Pacific students. At Unitec, many different initiatives and programs are applied all with the one goal in mind, i.e. engaging with Pacific students and helping them to succeed. Given the diversity of Pacific students at Unitec, it makes sense to also be diverse in the ways we support and help them. The following paper outlines the many different initiatives that have been applied at Unitec to provide support to its Pacific student population. The first part gives a brief background of the Pacific demographic makeup of New Zealand, and discusses why New Zealand has made it a priority to support Pacific students in tertiary education. The second part discusses Unitec’s commitment to supporting Pacific through; (i) the existence of the Pacific Centre for Learning, Teaching & Research, (ii) the development of the Pacific Success Strategy and (iii) the influence of the Fono Faufautua. The third part looks at the methods used by Unitec to support and assist Pacific students, starting with the Nakuita model that provides the foundation for Pacific engagement, as well as discussing the various initiatives that have been used to improve success rates for Pacific students. The last part will provide an analysis on how successful the initiatives have been at Unitec by looking at the success rates of the Pacific cohort during the 2014 academic year.