The impact of informal settlement upgrading on housing affordability : the experience of Hanna Nassif in Dar Es Salaam, Tanzania 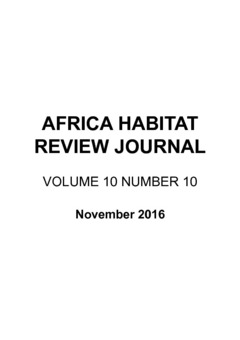 Upgrading of informal settlements is a feasible way of improving access to decent and affordable shelter. However, there is limited knowledge of the impact of upgrading on housing affordability. This paper aims to analyse the impact of informal settlement upgrading on housing affordability. Reference is made to Hanna Nassif in Dar es Salaam, Tanzania where empirical studies were carried out as a case study. Primary data were obtained through physical observation, photography and interviews. Observation and photographs were used to capture the physical transformations made to the structures in the settlement and to establish the housing conditions in the area. Interviews were conducted with key informants in the settlement about people’s perception and responses to upgrading and housing affordability. Literature review was conducted to provide documentary analysis needed to supplement the interviews and discussion made with relevant independent sources. The study revealed that upgrading of the informal settlement of Hanna Nassif improved the affordability of some residents, especially, homeowners who improved their houses and incomes, in addition to the infrastructure and services provided to the area. The paper finally proposes other considerations for improving the housing conditions in the area and achieving the objectives of upgrading the area.

School of the Built Environment, University of Nairobi