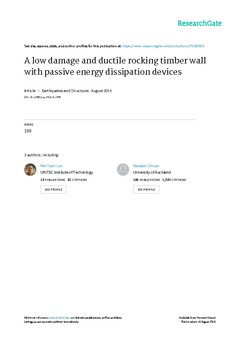 In conventional seismic design, structures are assumed to be fixed at the base. To reduce the impact of earthquake loading, while at the same time providing an economically feasible structure, minor damage is tolerated in the form of controlled plastic hinging at predefined locations in the structure. Uplift is traditionally not permitted because of concerns that it would lead to collapse. However, observations of damage to structures that have been through major earthquakes reveal that partial and temporary uplift of structures can be beneficial in many cases. Allowing a structure to move as a rigid body is in fact one way to limit activated seismic forces that could lead to severe inelastic deformations. To further reduce the induced seismic energy, slip-friction connectors could be installed to act both as hold-downs resisting overturning and as contributors to structural damping. This paper reviews recent research on the concept, with a focus on timber shear walls. A novel approach used to achieve the desired sliding threshold in the slip-friction connectors is described. The wall uplifts when this threshold is reached, thereby imparting ductility to the structure. To resist base shear an innovative shear key was developed. Recent research confirms that the proposed system of timber wall, shear key, and slip-friction connectors, are feasible as a ductile and low damage structural solution. Additional numerical studies explore the interaction between vertical load and slip-friction connector strength, and how this influences both the energy dissipation and self-centring capabilities of the rocking structure.