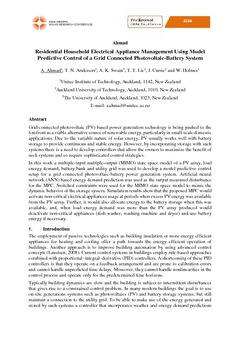 Grid-connected photovoltaic (PV) based power generation technology is being pushed to the forefront as a viable alternative source of renewable energy, particularly in small-scale domestic applications. Due to the variable nature of solar energy, PV usually works well with battery storage to provide continuous and stable energy. However, by incorporating storage with such systems there is a need to develop controllers that allow the owners to maximize the benefit of such systems and so require sophisticated control strategies. In this work a multiple-input multiple-output (MIMO) state space model of a PV array, load energy demand, battery bank and utility grid was used to develop a model predictive control setup for a grid connected photovoltaic-battery power generation system. Artificial neural network (ANN) based energy demand prediction was used as the output measured disturbance for the MPC. Switched constraints were used for the MIMO state space model to mimic the dynamic behavior of the storage system. Simulation results show that the proposed MPC would activate non-critical electrical appliances usage at periods when excess PV energy was available from the PV array. Further, it would also allocate energy to the battery storage when this was available, and, when load energy demand was more than the PV array produced would deactivate non-critical appliances (dish washer, washing machine and dryer) and use battery energy if necessary.