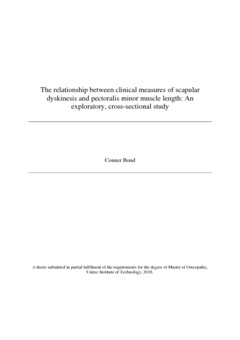 Bond, C. (2016). The relationship between clinical measures of scapular dyskinesis and pectoralis minor muscle length: An exploratory, cross-sectional study. A thesis submitted in partial fulfilment of the requirements for the degree of Master of Osteopathy, Unitec Institute of Technology.

The relationship between clinical measures of scapular dyskinesis and pectoralis minor muscle length: An exploratory, cross-sectional study. BACKGROUND: Scapular dyskinesis and pectoralis minor muscle shortness are of clinical interest in relation to shoulder rehabilitation. The extent to which scapular dyskinesis and pectoralis minor muscle shortness affect the shoulder and interact with each other is not fully understood. OBJECTIVES: 1) To determine the correlation between the pectoralis minor index (PMI) and the pectoralis minor length test (PMLT) when measured in a standardised position; 2) To determine the extent to which the PMI or PMLT is associated with the type or magnitude of scapular dyskinesis; 3) To investigate the correlation between shoulder pain and scapular dyskinesis, PMI or PMLT measurements; and 4) To determine the association between scapular upward rotation and scapular dyskinesis. DESIGN: Cross-sectional study. PARTICIPANTS: Females (n = 41) and males (n = 29) with and without current or history ofshoulder pain (n = 70, 140 shoulders). METHODS: PMI and PMLT were measured in all participants. Videos of scapular motion were rated by one observer using a modification of the 4-Type System (6-Type System) and the Scapular Dyskinesis Test (SDT). Upward rotation of the scapula was calculated from video screen captures. A Shoulder Pain and Disability Index (SPADI) questionnaire was completed for each shoulder. Pearson’s correlations were calculated between the PMI and PMLT, and for both PMI and PMLT in relation to both shoulder pain and upward rotation. Logistic regressions were undertaken to identify predictors for each type of dyskinesis (6- Type System) and for ‘obvious’ dyskinesis (SDT). RESULTS: ‘Very small’ but significant associations were found between shorter PMI and Type 1 dyskinesis. ‘Very low’ non-significant correlations were found between the PMI and PMLT. Increased PMLT (thought to be indicative of ‘shorter’ muscle) showed a ‘very small’ negative association with ‘obvious’ dyskinesis but PMLT demonstrated a ‘low’ to ‘moderate’ significant correlation with pain. Upward rotation and pain showed ‘very small’ non- significant associations between each type (4-Type System) and the magnitude of dyskinesis (SDT). CONCLUSION: The PMI and PMLT are not analogous measures, each correlated with different variables but not each other. There appears to be a link between a shorter PMI and Type 1 dyskinesis, while increased dysfunction with the PMLT is associated with less magnitude of scapular dyskinesis. A combination of both the PMI and PMLT may be more useful than one measure in isolation.