The Somali Diaspora : the integration and re-establishment of the community of Somali refugees in Aotearoa/New Zealand 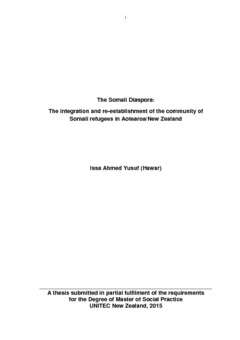 Yusuf, I.A. (2015) The Somali Diaspora: The integration and re-establishment of the community of Somali refugees in Aotearoa/New Zealand. An unpublished thesis submitted in partial fulfilment of the requirements for the Degree of Master of Social Practice, Unitec Institute of Technology.

This thesis examines the re-establishment of the Somali refugee community in Auckland and the degree to which Somali refugees have tried to integrate themselves into New Zealand’s society and the way of life in Auckland. This study also focused on what has supported and helped Somali refugee families to integrate and to ascertain any challenges and obstacles that the Somali community faced. Furthermore, this study looked into the impact that the financial burden of supporting family members and relatives overseas, mainly in refugee camps, had on the community. I have chosen to use a qualitative study to explore how far the Somali refugee community has integrated into the wider New Zealand community in Auckland through the use of critical, social, and theoretical framework as the main paradigm guiding this study. Using in- depth semi-structured interviews, I conducted eight interviews with participants from the Somali refugee community, and one focus group for eight service providers who had good experience in working with Somalis in Auckland. The collected data was examined and critically analyzed in regards to the level of integration the Somali community made. This study was influenced by the theoretical lens of Ager and Strang (2008) integration indicators. This study found that Somalis who came to New Zealand ten years ago have integrated well by forming social connections in terms of social bonds, social bridges and social links, and overcame many challenges including: unemployment, racism and discrimination, social isola‐ tion, language barriers and issues with education for youth. Supporting family members overseas financially has also had an immense impact on the Somalis living in Auckland. This study found the formation of the Somali community organiza‐ tion played an important role in the re-establishment of the community within the host community, and more importantly, acted as an advocacy for accessing services. Another interesting finding in this study was the social and cultural interac‐ tion between the Maori and Somali community in Auckland. Finally, another major finding of this study is the migration of Somalis moving to Australia in search of employment opportunities and a better life. This caused major worries for the Somali community in Auckland. Supervisors: Helene Connor and Susan Elliott.