Computational land use management of public spaces in New Zealand 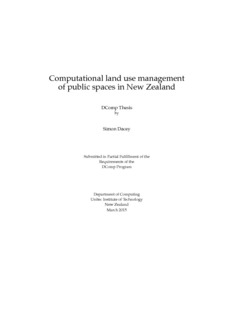 Land management is the process of managing the use and development of land resources, in both urban and rural settings. In all modern states, some land is held by central or local governments. This is called public land. Private property is a legal designation of the ownership of property by non-governmental legal entities. Private property is distinguishable from public property, which is owned by a state entity. We define land encroachment as the change in the perceived or actual use of land from either (a) human caused encroachment: the use of public land for private purposes, or (b) environmental caused encroachment: the change in the ability to use land for its original purpose from an environmental change. This thesis concen- trates on human-caused encroachment on public parks in the Auckland region of New Zealand. A two-part approach to support land management decision making is proposed. The first part of the approach used image processing techniques on spatial temporal digital image data to determine the likelihood of encroachment on public parks. The main advantage of this part of the approach was that it was capable of handling a large amount of data quickly. The second part of the approach involved comparing measurements of a public park’s boundary. The advantage of this part of the approach was that it visually represented multiple views of a boundary and highlighted the differences between them. Land management and planning is essential to assist the economic growth, sustainable resource use, and environmental protection of a city. A novel approach to automatic encroachment detection and evaluation to assist in decision making is described. Artificial intelligence (AI) is used to construct an intelligent agent that understands the images that are submitted to it. The approach begins with training the agent to identify and understand the land cover/use features, such as buildings, parks, trees, and roads, which are predominant in the region of interest. The machine is capable of carrying out segmentation on the park data by using the model developed from the training samples. The resulting images show the boundaries of the land cover/use features that are of interest. Once the agent has produced the boundaries of the land cover/use features, they can be analysed against the ground truth data (Auckland City Council boundary data) in order to determine the location, degree, and level of encroachment. Experiments have been performed on data collected in the form of digital images of parks from the Manukau and North Shore areas of Auckland that included 800 public parks in Auckland, New Zealand. The results of the experiments demonstrated the effectiveness of the approach. The im- pact of the encroachment, in terms of economic cost, could then be estimated. In the field of land management, it is common for stakeholders to dispute the location of boundaries between private land and public land. It was found that stakeholders disagreed with each other over boundaries. An approach is proposed that helps people to come to an agreement on position of boundaries (including a pixel-based approach, polygon-based approach, and middle boundary approach). The experiments were carried out on data relating to public parks in Auckland, New Zealand. Two sources of data, in the form of a set of points, were used: the official council boundary and the physical boundary as obtained using a high resolution GPS device in a field survey. The results of the experiments highlighted the differences between different stakeholder’s perceived boundaries. Land management issues include boundary disputes, encroachment, land cover change, and land use change. Boundary disputes occur when two or more stake holders have different views on the location of a boundary. The two-part approach, automatic detection and difference calculations, have been shown to be applicable to land management issues such as boundary disputes, encroachment, land cover change, and land use change. Automatic detection using remotely sensed images has been shown to detect possible encroachment, land cover change, and land use change. Difference calculations have been shown to highlight encroachment and also to present the differences from different stakeholders’ perspectives. It is noted that a limitation of the first part of the approach was that not all of the changes deected in images of public parks were due to encroachment. Also it is indicated that a limitation of the second part of the approach was that it requires boundary data to be physically collected on field surveys, which is a time consuming process. Possible future work includes adapting the two-part approach for use in other areas in New Zealand and adding stakeholder weighting to the middle-boundary calculations so that different possible solutions could be generated.