The architecture of opportunity : creating the box for people to think out of 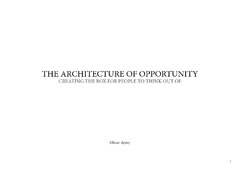 Ayrey, O. (2015). The architecture of opportunity : creating the box for people to think out of. A research document submitted in partial fulfilment of the requirements for the degree of Master of Architecture (Professional), Unitec Institute of Technology, New Zealand.

This research document looks to highlight the central issue that has plagued the architectural industry to date: that is, the concept of the Starchitect. For too long the field of architecture has celebrated the glamorously shallow works that continue to fill the world’s magazines and internet blogs. This project questions the architect’s role in creating built environments, identifying the common problem where designers chose to, or are instructed to construct buildings as statement pieces that portray their own idealized visions and the aspirations of their client, rather than constructing buildings that acknowledge and encourage the clients vision while enabling future occupants to impart their identity. Since architects are tasked with forming the environments in which people spend their lives, why then, in larger developments, does the industry show more interest in imposing designs that embody their own identity or style rather than guiding the people they are designing for in realising their own visions. The design component of this project looks at the current state of the architectural industry in relation to post-earthquake Christchurch and its rebuild. This project is essentially a criticism of the contemporary approach to rebuilding, renewing and reconstructing new cities. The relevance of this project comes from the conflicting responses between the community and the officials in charge of rebuilding Christchurch’s CBD. The earthquakes have unearthed an appetite for citizenry inclusion alongside a growing culture of exploratory development, allowing a new city identity to form. The method of recovery proposed by those in charge of the rebuild does not encourage the development of this culture and is instead looks to impose an identity. This document will look closely at Christchurch’s development, from the city’s conception through to today and will make comments on how the proposed recovery plan is repeating the same mistakes made in the past. Discussions will relate to the role that the architect plays within the development of urban space. The stance this paper takes is that architecture should be seen as a tool for enabling people to continuously reconstruct their city’s identity, rather than a vehicle for portraying an identity to the world. The design component for this project is to be an example of how we, as designers, can create the first stages of a piecemeal development that encourages people to explore different possibilities while providing the necessary restrictions that creativity requires. This design will be developed from an analysis of different forms of incremental developments in relation to the specific context of Christchurch. The project's main conceptual basis rests on the idea that creativity needs a box to think out of. Without boundaries, creative thought is suffocated by possibilities.