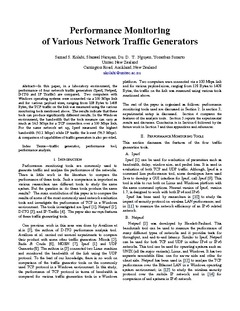 In this paper, in a laboratory environment, the performance of four network traffic generators (Iperf, Netperf, D-ITG and IP Traffic) are compared. Two computers with Windows operating systems were connected via a 100 Mbps link and for various payload sizes, ranging from 128 Bytes to 1408 Bytes, the TCP traffic on the link was measured using the various monitoring tools mentioned above. The results indicate that these tools can produce significantly different results. In the Windows environment, the bandwidth that the tools measure can vary as much as 16.5 Mbps for a TCP connection over a 100 Mbps link. For the same network set up, Iperf measured the highest bandwidth (93.1 Mbps) while IP traffic the lowest (76.7 Mbps). A comparison of capabilities of traffic generators is also provided.