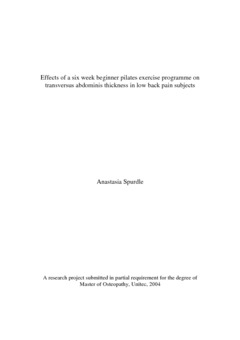 Spurdle, A. (2004). Effects of a six week beginner pilates exercise programme on transversus abdominis thickness in low back pain. A research project submitted in partial requirement for the degree of Master of Osteopathy, Unitec Institute of Techology, New Zealand.