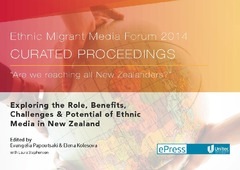 These curated proceedings present what was discussed during the Ethnic Migrant Media Forum, a one-day event hosted by the Department of Communication Studies at Unitec Institute of Technology’s Mt Albert campus in 2014. It is also an attempt to provide an analysis of what was discussed by identifying a number of emerging themes. This publication brings together the curated statements by ethnic media practitioners, academics, and industry representatives involved with ethnic media in New Zealand, presenting a host of issues on ethnic media’s role within the country’s bicultural and multicultural context and organised around the three key themes: 1) Defining ethnic, migrant, diasporic media – what does it mean, who is it, what communities does it represent? 2) Roles and aims of ethnic media – why does ethnic media matter, who does it matter for and what role does ethnic media play in NZ? 3) Impact, challenges and potential – how can ethnic media be used more effectively, what are the challenges and potential? An introductory chapter by forum organisers and this publication’s editors, A/Prof. Evangelia Papoutsaki and Dr Elena Kolesova, presents a background context against which these themes are situated, while Dr Peter Thompson from Victoria University contributes a discussion chapter that brings in a different perspective. Selected information presented by Niche Media at the start of the forum is presented in infographics. Featuring panel discussion highlights and statements from participants, including: Dr Ruth De Souza (keynote address) Dr Arezou Zalipour Dr Camille Nakhid Fezeela Raza Dr Francis Collins David Soh Rene Molina Roshila Prasad Terri Byrne Mary Dawson Carol Hayward Lynda Chanwai-Earle Sue Elliott Mary Lose Dr Prue Cruickshank Rebecca Palmer Stephen Stehlin Taiha Molyneux Sandra Noronha Lisa Taouma Martin Pouwels Hao Peng Naoe Hashimoto Setita Miller Stefan Herrick