Scarcity of ecosystem services : an experimental manipulation of declining pollination rates and its economic consequences for agriculture 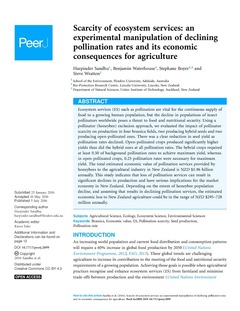 Ecosystem services (ES) such as pollination are vital for the continuous supply of food to a growing human population, but the decline in populations of insect pollinators worldwide poses a threat to food and nutritional security. Using a pollinator (honeybee) exclusion approach, we evaluated the impact of pollinator scarcity on production in four brassica fields, two producing hybrid seeds and two producing open-pollinated ones. There was a clear reduction in seed yield as pollination rates declined. Open-pollinated crops produced significantly higher yields than did the hybrid ones at all pollination rates. The hybrid crops required at least 0.50 of background pollination rates to achieve maximum yield, whereas in open-pollinated crops, 0.25 pollination rates were necessary for maximum yield. The total estimated economic value of pollination services provided by honeybees to the agricultural industry in New Zealand is NZD $1.96 billion annually. This study indicates that loss of pollination services can result in significant declines in production and have serious implications for the market economy in New Zealand. Depending on the extent of honeybee population decline, and assuming that results in declining pollination services, the estimated economic loss to New Zealand agriculture could be in the range of NZD $295–728 million annually.