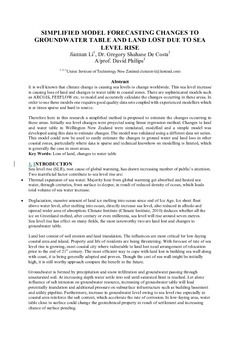 It is well known that climate change is causing sea levels to change worldwide. This sea level increase is causing loss of land and changes to water table in coastal zones. There are sophisticated models such as ARCGIS, FEEFLOW etc. to model and accurately calculate the changes occurring in these areas. In order to use these models one requires good quality data sets coupled with experienced modellers which is at times sparse and hard to source. Therefore here in this research a simplified method is proposed to estimate the changes occurring in these areas. Initially sea level changes were projected using linear regression method. Changes to land and water table in Wellington New Zealand were simulated, modelled and a simple model was developed using this data to estimate changes. The model was validated using a different data set series. This model could now be used to easily estimate the changes to ground water and land loss in other coastal zones, particularly where data is sparse and technical knowhow on modelling is limited, which is generally the case in most areas.