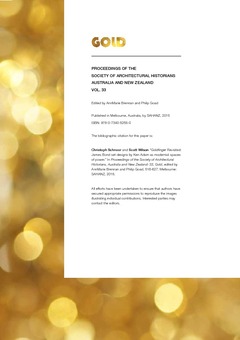 Ken Adam (b. 1921) developed set designs for seven of the early James Bond films and a number of other important works. Goldfinger (1964) is among the most famous of these films, and Adam’s designs have since made film and design history, featuring in a number of influential exhibitions and publications. Adam’s life as an exiled German Jew, who studied architecture in London and who flew for the RAF during the Second World War, means, as Petra Kissling-Koch’s suggests in her exploration of Adam’s work, that these designed spaces of (evil) power as the hideouts of Bond’s antagonists can be understood directly in relation to Adam’s historical context and biography. This paper offers a close examination of Adam’s designs, paying particular attention to the development of the Bond series through Dr No, Goldfinger and You Only Live Twice, and the ways in which Adam’s work makes visible a historically and contextually informed relationship between architecture, power and the representation of evil. While the cinematic representations of the spaces of evil – especially in the Bond franchise – evolve and alter over time, Adam’s work is important for, at least, two reasons: First, Adam’s designs concretely associate in popular culture the relationship between modernist architecture and specific articulations of power. Second, Adam’s designs foreground set design as a site of narrative detail, rather than merely being the place within which the narrative occurs. While these monumental sets were designed to function within an ‘evil’ role and therefore use an architectural language already associated with specific articulations of power, Adam’s set designs also make visible a version of modernist architecture that was attractive and which may have strongly influenced the general public’s perception of modern architecture. Adam’s promotion of modernist architecture through the medium of film establishes a template for the representation of the spaces of power within the spy genre that are, themselves, so powerful that they quickly become the de-facto blueprint for subsequent representations.