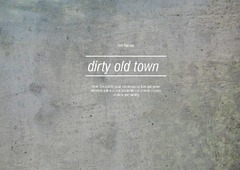 This research project set out to answer the question stated on page 6: can an architectural proposition provide a connection between a city’s iconic natural assets and enhance a real and metaphorical sense of place? To effectively answer this question, an approach was taken to approach the project with a design, research, design approach. That is, a dual approach of both personal design and investigation of already established architectural literature along with precedent projects would assist in reaching an acceptable solution, from both an academic and a personal perspective. Early in the project, it became apparent after examining several built projects that the primary focus of the project would be one of urban design. While the subject of urban design has a wealth of literature available, it is still a relatively contentious subject in terms of both architecture and wider planning. That is because as a discipline it involves so many different variables that it is hard to pigeonhole under one profession’s umbrella. However, it is these complexities that make it much more interesting and, because of its holistic nature, more varied and rewarding outcomes are achievable. What’s more, in order to understand an urban issue that much more effectively, a full analysis of the scope of the project must be done. That is, not just architectural knowledge should be canvassed, but historical, social, environmental and economic information needs to be evaluated in order to reach a more definitive conclusion. Therefore, a review of existing knowledge of the discipline and those built projects that have a specific correlation to that of the overarching parameters of this project was completed in conjunction with more location-specific knowledge-gathering. These investigations included analysis of the current urban form of the place in an attempt to establish an architectural solution, which then in itself, highlighted several issues resulting from the past 50-odd years of poor city planning and development. Thus, can a (single) architectural proposition provide the aforementioned connection and enhance sense of place? In effect, no. That is, without perhaps creating something that in itself becomes overly complex and out of context with the urban design theory investigated for this project. However, a series of architectural interventions with a broad focus on achieving a connection that references academic, built best practice and coalesces with existing urban context should provide suitable illumination for a solution or solutions to the above mentioned issues. And if designed primarily with people in mind, it should, with luck, enable the question to be answered effectively. Project sites: The Rivermouth, Huatoki Plaza, Huatoki Square/Piazza, Huaktoki Riverside.