Exploring the impact of online political activism on political processes in Kazakhstan : the Zhanaozen uprising 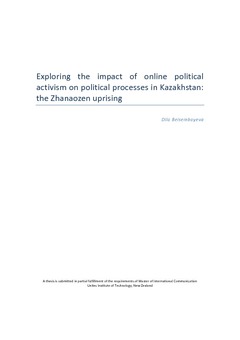 Beisembayeva, D. (2016). Exploring the impact of online political activism on political processes in Kazakhstan : the Zhanaozen uprising. An unpublished thesis is submitted in partial fulfillment of the requirements of Master of International Communication, Unitec Institute of Technology, New Zealand.

In recent years social media attracted a lot of scholarly attention but exploring social media in a particular geographical locations was rather slow. The impact of social media on political, social and economic processes in Kazakhstan has not been explored yet. This thesis presents empirical findings of a research examining the use of social networking sites amongst Kazakhstanis during the uprising in the rich-oil town of Zhanaozen on 16 December 2011. It is guided by the main research question that looks at ”What impact does online political participation have on political processes in Kazakhstan?” This research provides a preliminary and exploratory analysis of how two blogging platforms: Yvision and LiveJournal serve as a foundation for the political and socially involved Kazakhstanis, and how in turn, this could have an effect on the political process in the post-soviet authoritarian state of Kazakhstan. This research applied a two-stage content analysis of messages posted on the blogging platforms (Yvision and LiveJournal) and in the two national newspapers Kazakhstanskaya Pravda and Golos Respubliki and in its online version – Respublika portal. In both instances, the period of six months was covered: from 16 December of 2011 when the uprising took place until May of 2012 when the first trials of the protesters began. Such a specific timeframe was chosen as this research focuses on the representation of the uprising both in the traditional forms of media as well as online and the consequences it had on political participation in Kazakhstan. Data is collected via non-participatory technique with a non-random sample selection process that allows focusing on the events of 2011 in Zhanaozen. Research findings demonstrated in the light of the uprising, online political activism does have an impact on political participation in Kazakhstan. Although Kazakhstanis are generally quite apolitical, such a tragic event served as a catalyst in raising political awareness and online media provided a platform for exploring this. However, not only did the authoritarian government prevented Kazakhstanis from being more politically involved by applying “just-in-time” censorship techniques, the existing digital gap prevented the majority of Kazakhstani to go online and participate in the online debate. Findings have also indicated that the crisis in Zhanaozen highlighted the long-standing problems with ethnic return migration as well as national and ethnic identity amongst Kazakhs. This thesis contributes to existing research on how political activism online can provide support for political activism online and impact the governing bodies. It also establishes a foundation for future studies on Kazakhstan and impact social media and activism has on it.

160606 Government and Politics of Asia and the Pacific, 200102 Communication Technology and Digital Media Studies