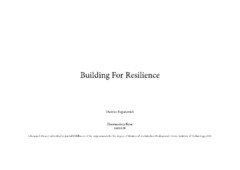 Kaur, H. (2016). Building for resilience. An unpublished research project submitted in partial fulfillment of the requirements for the degree of Masters of Architecture (Professional), Unitec Institute of Technology, New Zealand.

As the population, infrastructure and economies around the world are growing, some global issues - like climate change and natural disasters are hindering the social and economic growth in some developing countries, like Vanuatu. The focus of this research project is on designing an educational and research facility, which allows the people of Vanuatu to prepare for and overcome a natural disaster by providing training and emergency relief. The facility will work in two different phases a ‘pre-disaster phase’, and a ‘post-disaster phase’. The first phase will cater to the everyday life of people where the centre will function as an educational and research facility. The locals, government and disaster relief organisations will have a chance to collaborate and share knowledge in this phase. The second phase is after a disaster has occurred when the centre’s primary role is the emergency relief facility for the local people by local and international disaster relief organisations. There is another, very short phase, immediately after a disaster, in which the repairs to the damaged parts of the building can be quickly performed. The UNU-EHS (United Nations University’s Institute for Environment and Human Security) has ranked Vanuatu “the world’s most disaster prone country” in an annual World Risk Report four years in a row. The reason Vanuatu ranks at the top is not because it’s exposed to natural disasters excessively more but because of its lack of preparedness, overall vulnerability based on susceptibility, lack of coping and adaptive capacities. In this project, the Disaster Relief Centre is located in Port Villa, the capital of Vanuatu, near the USP campus. It will be the hub of a system of satellite relief station throughout the main settled island of the nation. The design solution has two scales: a master plan for the entire DRC compound, and the design of the main DRC building, and both of them are presented in three states: pre-, in- and post; disaster phase. The design is based on a mix of considerations: functional efficiency; cultural sensitivity; resource self-sufficiency (resilience) and efficiency (sustainability). The setting of this thesis might be for a specfic country but I am hoping that it can be taken as an example for other less developed countries which suffer majorly from natural disasters. The idea behind the project is that educating the people to prepare for a natural disaster is more important for resilience than anything else and should be able to be replicated anywhere. The role of architecture in this project is to create a design which is strong and should be able to withstand any natural event. Therefore, it will use modern construction methods but will also incorporate the cultural aspect in it for the locals to create a familiar environment. The influential factor behind the idea of incorporating the cultural aspect in modern architecture is to help provide ‘a sense of a safe place’ for the locals and also be educational and inspirational for them at the same time.