Mind mine : a memorial for Pike River Mine 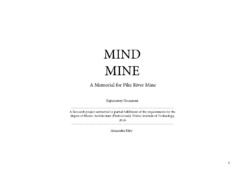 Riley, A. (2016). Mind mine : a memorial for Pike River Mine. Explanatory document. An unpublished research project submitted in partial fulfillment of the requirements for the degree of Master Architecture (Professional). Unitec Institute of Technology, New Zealand.

Pike River Mine exploded on the 19th November 2010 at 3:44pm, killing 29 of the 31 trapped in the mine. The decision was made not to reopen the mine and the bodies remain permanently entombed. This event became New Zealand’s worst industrial disaster of the modern era. The memory of this event must be remembered to ensure mistakes of the past are not repeated. A memorial can provide a place where these memories can be kept alive. The archetype of memorial that was used is the cenotaph, a place that is erected in memory of people buried elsewhere. Research revealed that cenotaphs of the past have encouraged collective reflection, but it has been found that very few succeed in enabling individual reflection and successfully connecting with the memory they are trying to convey. A new method was developed of how architecture can be designed to successfully memorialise a disaster. This method consists of two techniques: 1.‘experience of a memory’ personal accounts of experiences developed into abstracted two-dimensional and three-dimensional images and forms 2. ‘open-ended’ architectural techniques Each technique has its own set of design parameters. The fusion of these two techniques allows for a successful memorial. Each including both collective and individual spaces to allow for critical reflection. This method was used to design the cenotaph for the Pike River Mine disaster. The cenotaph was divided into three separate locations concerning the wider implications of memories of the disaster, Pike River, Greymouth and Wellington. The Pike River Mine disaster is the central issue of this cenotaph. The Pike River design is closely situated to the disaster, where the natural light illuminates the space reminiscent of the explosion that occurred within the mine. In a wider context findings revealed that West Coast mining disasters preceding Pike River Mine, such as Brunner and Strongman, resulted with similar causes. The Greymouth design responds to these other disasters with a series of individual and collective tunnels of varying scales that lead down into the ground and then up to the light. In an even greater context there was a succession of flaws and revelations found in health and safety not only in mining but in all workplaces of New Zealand. The Wellington design represents the physical scars left behind, caused by the lack of legislation and attitude towards health and safety following a pattern of tightened and weakened legislation throughout history.