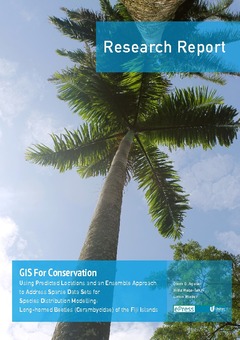 Several modelling tools were utilised to develop maps predicting the suitability of the Fiji Islands for longhorned beetles (Cerambycidae) that include endemic and endangered species such as the Giant Fijian Beetle Xixuthrus heros. This was part of an effort to derive spatially relevant knowledge for characterising an important taxonomic group in an area with relatively few biodiversity studies. Occurrence data from the Global Biodiversity Information Facility (GBIF) and bioclimatic variables from the WorldClim database were used as input for species distribution modelling (SDM). Due to the low number of available occurrence data resulting in inconsistent performance of different tools, several algorithms implemented in the DISMO package in R (Bioclim, Domain, GLM, Mahalanobis, SVM, RF and MaxEnt) were tested to determine which provide the best performance. Occurrence sets at several distribution densities were tested to determine which algorithm and sample size combination provided the best model results. The machine learning algorithms RF, SVM and MaxEnt consistently provided the best performance as evaluated by the True Skill Statistic (TSS), Kappa and Area Under Curve (AUC) metrics. The occurrence set with a density distribution of one sampling point per 10km2 provided the best performance and was used for the final prediction model. An ensemble of the best-performing algorithms generated the final suitability predictive map. The results can serve as a basis for additional studies and provide initial information that will eventually support decision-making processes supporting conservation in the archipelago.