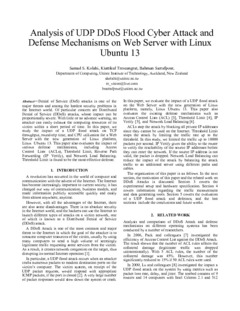 Denial of Service (DoS) attacks is one of the major threats and among the hardest security problems in the Internet world. Of particular concern are Distributed Denial of Service (DDoS) attacks, whose impact can be proportionally severe. With little or no advance warning, an attacker can easily exhaust the computing resources of its victim within a short period of time. In this paper, we study the impact of a UDP flood attack on TCP throughput, round-trip time, and CPU utilization for a Web Server with the new generation of Linux platform, Linux Ubuntu 13. This paper also evaluates the impact of various defense mechanisms, including Access Control Lists (ACLs), Threshold Limit, Reverse Path Forwarding (IP Verify), and Network Load Balancing. Threshold Limit is found to be the most effective defense.