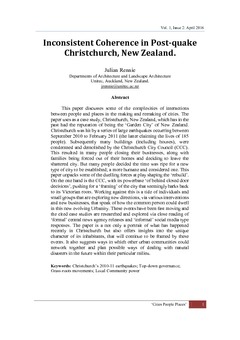 This paper discusses some of the complexities of interactions between people and places in the making and remaking of cities. The paper uses as a case study, Christchurch, New Zealand, which has in the past had the reputation of being the ‘Garden City’ of New Zealand. Christchurch was hit by a series of large earthquakes occurring between September 2010 to February 2011 (the latter claiming the lives of 185 people). Subsequently many buildings (including houses), were condemned and demolished by the Christchurch City Council (CCC). This resulted in many people closing their businesses, along with families being forced out of their homes and deciding to leave the shattered city. But many people decided the time was ripe for a new type of city to be established; a more humane and considered one. This paper unpacks some of the duelling forces at play shaping the ‘rebuild’. On the one hand is the CCC, with its powerbase ‘of behind closed door decisions’, pushing for a ‘framing’ of the city that seemingly harks back to its Victorian roots. Working against this is a tide of individuals and small groups that are exploring new directions, via various interventions and new businesses, that speak of how the common person could dwell in this new evolving Urbanity. These events have been fast moving and the cited case studies are researched and explored via close reading of ‘formal’ central news agency releases and ‘informal’ social media type responses. The paper is a not only a portrait of what has happened recently in Christchurch but also offers insights into the unique character of its inhabitants, that will continue to be framed by these events. It also suggests ways in which other urban communities could network together and plan possible ways of dealing with natural disasters in the future within their particular milieu.