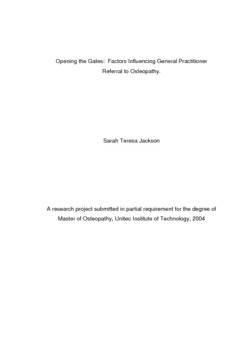 Traditionally General Practitioners (GPs) have referred patients to physiotherapy for manual therapy. In 1988 only 15% of Wellington GPs referred patients for osteopathic treatment (Hadley, 1988). Since then there has been an increase in the popularity of complementary and alternative medicines, including osteopathy. The osteopathic profession in New Zealand has recently undergone several changes. These include regulation under the Health Practitioners Competency Assurance Act 2003 and expansion as a profession with the first new practitioners graduating from a Masters approved New Zealand based training programme. On the eve of osteopathic registration, Auckland based GPs were surveyed regarding their referral of patients to osteopathy, physiotherapy and chiropractic, the factors that influence their referral patterns, and their attitudes towards osteopathy. Results were compared to a similar survey completed 10 years earlier. It was found that physiotherapy is still the first choice for GP referral to manual therapy, although referrals to osteopathy have increased. There also appears to have been a shift away from chiropractic and towards osteopathy. Although GPs demonstrated attitudes of medical dominance and superiority over alternative therapies, it appears that positive treatment results experienced by patients influence GP referral patterns. The need for scientific evidence establishing the effectiveness of osteopathic treatment was highlighted. GPs claimed to have knowledge of osteopathy yet demonstrated a limited understanding with the confined scope of practice for which they would refer to osteopathy. Nevertheless, GPs wish to be more informed of osteopathic medicine.