Immigrant entrepreneurs in Malaysia : an exploratory study on their business success and prospects in small retail business 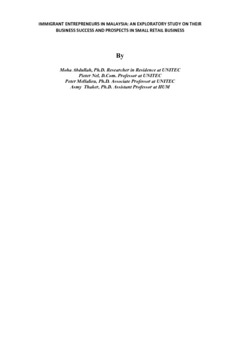 It is commonly agreed that international migration is as old as human history. International migration also continues to define and reshape nations as well as affecting the culture and daily life of many people. While it would not be always correct to argue that its impact has always been benign, it is increasingly evident that migration consistently benefits the countries of destination and origin, as well as the migrants themselves. Similarly, it is undeniable that the economic development of a nation (both developed and developing alike) largely depends on the emergence of dynamic innovative entrepreneurs and new enterprise creation. Economic activities carried out by immigrant entrepreneurs and their enterprises could also be a huge potential source of entrepreneurial and economic impetus for the respective recipient countries. Their presence, role and contribution to the establishment and growth of new businesses, especially small business, in a country usually leads to economic prosperity and job creation (Ribeiro-Soriano & Mas-Verdú, 2015). The benefits of having immigrant entrepreneurs in the host country such as physical capital investment, job creation for local workers and contribution towards the country’s GDP receive considerable recognition (see Lin 2015). Congruent to this also, some countries provide special visas and entry programmes to the immigrant entrepreneurs in order to promote business activities and obtain foreign investment. Lofstrom (2014), for instance, notes that efforts to attract global immigrant entrepreneurs has not been limited to developed countries but also includes developing countries alike. While knowledge on the importance of immigrant entrepreneurs for socio-economic development exists from the traditional view of pull and push factors, there are at least two different views of the migratory pathways of international immigration. One argues that the push-pull factors of spatial imbalances in the distribution of production factors forces them to leave their place of origin for a relatively high expected outcome in the country of destination. In this regard, international migration offers technical skills and unskilled labour for receiving countries. Another view is that the immigrants with entrepreneurial and management skills are the basic source of entrepreneurial activities in the host country. These pathways of international migrants include those who search for the best place that offers opportunity for profit and to create their own jobs and employment for others. Like other countries, Malaysia is not exceptional in hosting many immigrants and some of them become entrepreneurs in their own ways, (Rahmandoust, Ahmadian, & Shah, 2011). As their presence in entrepreneurial pursuit is becoming increasingly noticeable, there is a need to explore their issues, challenges, and business prospects along with their antecedents. This is simply due to the fact that there is a dearth of knowledge and little empirical research that has been made available. As immigration continues to be a significant presence in Malaysia, it can be stated that some migrants are forced by circumstances to migrate. Others are attracted by the prospect of greater economic, social and educational opportunities for themselves and their families. Whilst many migrants take up positions in paid employment, a considerable proportion of them migrate specifically to initiate new venture startup activities. What are the specific characteristics of these entrepreneurs? What are their challenges, their successes, and their prospects for the future? What conclusions can be drawn? This article attempts to address these questions based on a survey on 314 immigrant entrepreneurs in Kuala Lumpur conducted early this year (2015).