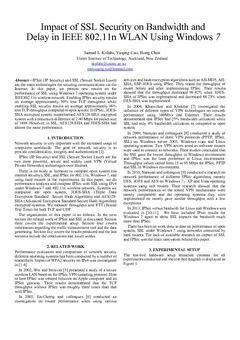 IPSec (IP Security) and SSL (Secure Socket Layer) are the main technologies for securing communications via the Internet. In this paper, we present new results on the performance of SSL using Windows 7 operating system under IEEE802.11n wireless network. Enabling IPSec security results on average approximately 50% less TCP throughout while enabling SSL security results on average approximately 96% less TCP throughput compared to open system. In IPSec, 3DES-SHA encrypted system outperformed AES128-SHA encrypted system with a maximum difference of 2.40 Mbps for packet size of 1408. However, in SSL, AES128-SHA and 3DES-SHA had almost the same performance.