What are the effects of sitting versus standing on perceptual reasoning performance throughout a simulated working day? 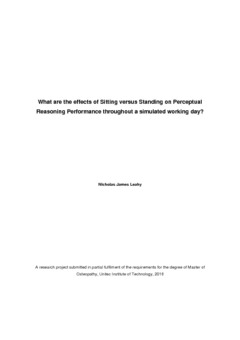 Leahy, N. J. (2016). What are the effects of sitting versus standing on perceptual reasoning performance throughout a simulated working day? An unpublished research project submitted in partial fulfilment of the requirements for the degree of Master of Osteopathy, Unitec Institute of Technology, New Zealand.