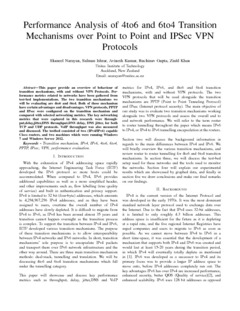 This paper provide an overview of behaviour of transition mechanisms, with and without VPN Protocols. Performance metrics related to networks have been gathered from test-bed implementations. The two transition mechanisms we will be evaluating are 4to6 and 6to4. Both of these mechanism have certain advantages and disadvantages. VPN protocols, PPTP and IPsec were configured on the transition mechanism and compared with selected networking metrics. The key networking metrics that were captured in this research were throughput, delay, jitter, DNS throughput,DNS delay, DNS jitter, for both TCP and UDP protocols. VoIP throughput was also measured and discussed. The testbed consisted of two (IPv4/IPv6) capable Cisco routers, and two machines which were running Windows 7 and Windows Server 2012.