Product design of a pair of ergonomic crutches 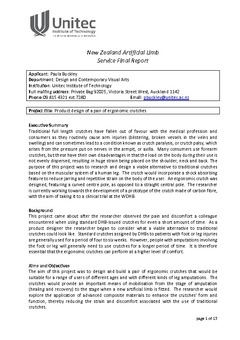 Traditional full length crutches have fallen out of favour with the medical profession and consumers as they routinely cause arm injuries (blistering, broken vessels in the veins and swelling) and can sometimes lead to a condition known as crutch paralysis, or crutch palsy, which arises from the pressure put on nerves in the armpit, or axilla. Many consumers use forearm crutches, but these have their own disadvantages in that the load on the body during their use is not evenly dispersed, resulting in huge strain being placed on the shoulder, neck and back. The purpose of this project was to research and design a viable alternative to traditional crutches based on the muscular system of a human leg. The crutch would incorporate a shock absorbing feature to reduce jarring and repetitive strain on the body of the user. An ergonomic crutch was designed, featuring a curved centre pole, as opposed to a straight central pole. The researcher is currently working towards the development of a prototype of the crutch made of carbon fibre, with the aim of taking it to a clinical trial at the WDHB.