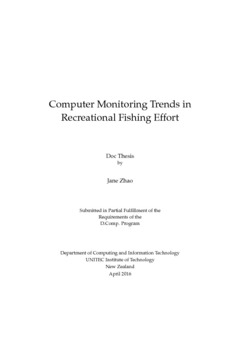 Annual estimates of removals from fish stocks are a fundamental requirement for any fisheries management regime. The surveillance of maritime boat ramp aims to balance the sustainability of fisheries stocks and the impacts of fishing on the environment with the economic opportunities they offer, since recreational fishers account for a substantial proportion of the harvest taken from many inshore fisheries. Thus overlooking key boat ramps by a network of web cameras is able to monitor levels of recreational effort over the long term. The manual interpretation of images provided by these cameras is time intensive, and strategies have been developed to minimize the number of images that are captured by each camera. Images are only interpreted from a subsample of 60 days per year, although images are collected and stored throughout the year. Images of the boat ramp are also at the low frequency of one frame per minute to ensure the adequate detection of a vessel being launched and retrieved, while minimizing the number of images stored, and hence the time required to interpret this footage. This process could be significantly improved by automating the boat counting process, if images are interpreted from all 365 days of the year without any subsampling. The key challenges to be addressed when developing a computer vision based boat counting system are: how to accurately model maritime scenes; and how to track trailer boat in low-frame-rate (LFR) of 1 frame per minute (1-fpm) videos. Consider background modeling for a dynamic maritime environment, at the interface between the land and the sea. The region-of- interest (ROI) contains both areas of land and water. The boundary between the water and land changes over time with the rise and fall of the tide. As a consequence, the distribution of water and land varies over time in the ROI, which makes background modeling in this case extremely difficult given the varying area of water and amount of light reflected from this water at differing times of day and sun angle. Visual object tracking in LFR videos is a highly challenging problem in the computer vision community, because the location and orientation of an object can change in a highly unpredictable fashion between frames when they are captured at a low frequency. When monitoring boat ramp traffic, I attempt to track the movement of trailered boats, when they are observed in 1-fpm videos. The minute- by-minute discontinuity seen in LFR video is problematic because of unpredictable variations of object on appearance, scale, and motion, and because backgrounds can be dynamic. To interpret dynamic maritime boat ramp background, a Cognitive Background Modeling method for Land and Water composition scenes (CBM-lw) is proposed. In this method, a geometrical calculation based on tidal data gives an initial indication of the tidal water- line, and pixel classification is used to determine the optimal boundary between areas of land and water. Different learning rates and background updating strategies are used for areas of land and water to improve modeling performance. The influence of sunrise and sunset is also considered by the new method, to account for changes in outdoor luminosity. This method can also be used to identify and reject corrupted images, which in turn improves the accuracy of background modeling. I propose a new object tracking algorithm for automatically tracking objects in 1-fpm LFR videos. With this method, each boat is tracked as a combination of a trailered boat and a towing vehicle (a boat- vehicle combo), and the relationship between these two components is modeled in multi-feature space and traced across consecutive frames. Lifespan trajectory templates and associations extracted from the observation of historical boat launching and retrieving activities are adopted to mitigate the discontinuity caused by the 1-fpm frame rate. A combination of various features is used to make the proposed algorithm robust to sources of variation, such as changes in object appearance, motion discontinuity, and varying levels of illumination. The lifespan of detected objects in this situation is usually short, and the proposed method takes into account temporal correlations in object appearance throughout the targets lifespan, rather than over the latest two frames, which is usually the case with conventional tracking algorithms. The developed computer boat counting prototype has been evaluated using web camera imagery collected at boat ramps at Waitangi, Raglan and Takapuna over a three-year period (721,440 images taken between 2010 and 2012). In my experiments, the proposed algorithms provide more robust and accurate background modeling and object tracking than the state-of-the-art algorithms. In particular, the background modeling is more robust to the dynamic land and water compositional scenes. The object tracking is more satisfactory in cases of 1-fpm LFR, due to the method taking into account correlated objects modeling and object behavior prediction. As a result, the proposed methods provide more satisfactory boat counting performance than the existing methods.