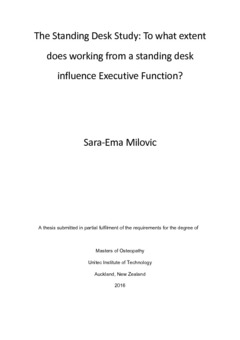 Milovic, S.-E. (2016). The standing desk study: To what extent does working from a standing desk influence executive function? An unpublished thesis submitted in partial fulfilment of the requirements for the degree of Masters of Osteopathy, Unitec Institute of Technology, New Zealand.

Recent evidence has highlighted the correlation between sedentary behaviour and an increased all-cause mortality. This is a problem commonly observed in the workplace due to the current ergonomic format of traditional seated workstations, where employees are spending long hours in sedentary behaviours. The introduction of standing desks into the workplace provides an alternative to reduce sedentary behaviours associated with a conventional seated workstation. As this is a workstation modification, it is necessary to determine the effects of standing on cognitive performance. Executive function is an important domain of cognition that is thought to be a key process in intelligent behaviour. Recognising the effects that standing desks have on executive function may provide support for their implementation in the workplace. A crossover design was used to investigate the effects of a standing desk, compared with a traditional seated workstation, on executive function during a simulated working day. Thirty healthy participants (14 female, 16 male), aged between 20-49 years old, were recruited and asked to complete a number of cognitive tests over two 7.5-hour sessions, one whilst standing, and the other whilst seated. There were three testing sessions (Morning, Midday and Afternoon) throughout each day comprised of batteries of cognitive tasks, including four tasks specifically testing Executive Function: Verbal Fluency, Visuospatial Search, Stroop Effect and Trail Making. A repeated measures ANOVA was performed to investigate whether there was a difference between the sitting and standing conditions, and Time of Day (Morning, Midday, Afternoon) was also analysed. Executive function was not found to be negatively affected by standing when compared to sitting, but evidence was found to suggest an improvement in performance in the Visuospatial Search task, the Trail Making Task, and the Stroop Effect Task across the simulated work day. The results of this study provide supporting evidence to suggest that standing desks may be effectively implemented into the workplace without negatively influencing Executive Function. Standing desks should be considered by employers to provide an effective workplace alternative to sitting while reducing the rapidly increasing health risk caused by sedentariness.