Osteopathy in the cranial field - an investigation into patient perception, satisfaction and self-reported outcomes of a single treatment session 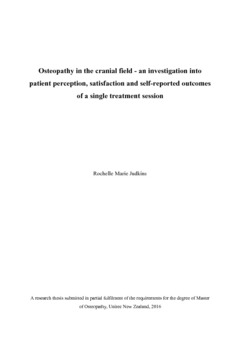 Judkins, R.M. (2016). Osteopathy in the cranial field - an investigation into patient perception, satisfaction and self-reported outcomes of a single treatment session. An unpublished research thesis submitted in partial fulfilment of the requirements for the degree of Master of Osteopathy, Unitec Institute of Technology, New Zealand.

AIM: To investigate patient experiences of osteopathy in the cranial field (OCF) treatment, by assessing patients’ perception, level of satisfaction, and self-reported outcomes after a single OCF treatment session in a New Zealand osteopathy patient population. BACKGROUND: OCF is a treatment paradigm used by osteopaths and other manual therapists. Most research on OCF has been concerned with exploring the mechanism behind the treatment paradigm. Very few studies have focused on the patient experience. The present study used a questionnaire developed to explore patient perceptions, satisfaction, and self-reported treatment outcomes. METHODS: A survey-based research design was used in a clinical setting. Two tools were used: the Patient Perception Measure-Osteopathy (PPM-O), and a demographic survey. Twelve osteopaths were recruited as practitioners, and 107 of their patients were recruited as participants in the study. Of the 107 participants, 81 responses were deemed suitable for inclusion, as OCF techniques had been applied for the majority of the treatment sessions. Data were analysed using both quantitative and qualitative methods. RESULTS: The vast majority of participants (96.2%) responded that osteopathic treatment helped their condition ‘mostly’ (n= 39), or ‘always’ (n= 38). The most frequently experienced sensations were ‘relaxed’, ‘relieving’, ‘releasing’, ‘centred’, ‘softening’, ‘lightness’, and ‘unwinding’. A positive relationship was observed between PPM-O and demographic variables. Three themes were also identified: 1) ‘A discernible movement toward health; 2) ‘Perception of the healing interface’; and 3) ‘Satisfaction with the service of healthcare’. CONCLUSIONS: The sensations experienced by OCF patients in the present study, as well as their largely positive perception of OCF, is consistent with previous studies (Mulcahy & Vaughan, 2014). The construct validity of the PPM-O in a population receiving OCF treatment requires further investigation.