Thinking whilst standing : an examination of the effects of standing desks on cognitive processing speed 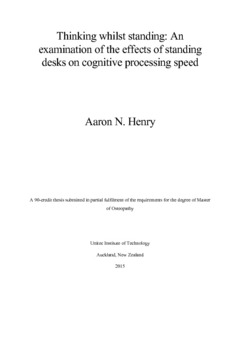 Henry, A. N. (2015). Thinking whilst standing: An examination of the effects of standing desks on cognitive processing speed. An unpublished 90-credit thesis submitted in partial fulfilment of the requirements for the degree of Master of Osteopathy, Unitec Institute of Technology, New Zealand.

Recent evidence shows that high levels of prolonged sitting is negatively correlated with increased all-cause mortality. Moreover, it appears that physical activity may not negate this risk. Not only does musculoskeletal pain and discomfort impact employee health, but the cost to employers and the larger economy is great. The introduction of standing desks into the workplace offers a potential solution to this inactivity problem, and, therefore, it is logical to enquire about the effects of standing on cognitive performance. Processing Speed is a main component of cognition and is correlated with general measures of intelligence. Understanding the effects that standing desks have on Processing Speed can grant insight into the effects of these desks on general cognitive performance and resulting work output. A cross-over design was used to investigate the effect of a standing desk compared with a seated desk on Processing Speed during a simulated “work” day. Thirty healthy participants (14 female, 16 male), aged between 20 and 49 years old, were recruited to complete a battery of cognitive tasks over two 7.5 hour long sessions, one session of standing and one of sitting. The battery of cognitive tasks included four tasks testing Processing Speed. Three of the tasks, Symbol Search, Cancellation, and Coding were derived from the Wechsler Adult Intelligence Scale (WAIS-IV) tests of cognition, and the fourth task was derived from the Woodcock-Johnson III test of cognitive ability. A two-way repeated measures analyses showed that Processing Speed was not affected by standing when compared to sitting. A trend toward significance was found in the Coding task, revealing better performance in Processing Speed when standing. The results of this study provide evidence to suggest standing desks can be implemented into the workplace without causing reductions in Processing Speed and may, in fact, be beneficial. Because sitting for prolonged periods is harmful to physical health and incorporates large health costs, employers should consider standing desks as an alternative to sitting desks that could improve workplace health, and thereby reduce the associated costs without effecting an important aspect of cognition.