Islamic University in Kunar : a study of contemporary Islamic architecture in the context of Kunar, Afghanistan 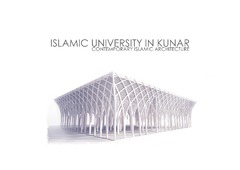 Farid, Z. (2012). Islamic University in Kunar: A study of contemporary Islamic architecture in the context of Kunar, Afghanistan. Masters Thesis Explanatory Document. An unpublished research project submitted in partial fulfilment of the requirement for the degree of Master of Architecture Professional, Unitec Institute of Technology, New Zealand.

Afghanistan has suffered through decades of wars. Its infrastructure has been decimated, and the loss of life is incalculable. A significant number of scientists, scholars and intellectuals were either killed or migrated out of the country, leading to the need of redevelopment from a grass roots level. As such, education is essential for the redevelopment of the country and the society as a whole with the need to build new educational facilities that could cater to the learning and growth of a new generation of scholars, scientists, mathematicians and leaders. Although a number of schools have sprung up around the country in recent years, there is still a lack of tertiary institutes which provide the population with centers for higher learning that combine emphasis on Islamic principles with local culture. This is more so prevalent in the eastern region of Afghanistan. As majority of Afghanistan’s population adhere to Islam, it is important that the new educational facilities cater to their beliefs. It is also the religious duty of every Muslim to seek knowledge. Therefore a new Islamic university, which would include religious and non-religious studies, in eastern Afghanistan would not only benefit the local area but also the greater Pashtoonistan region which includes the Khyber Pakhtunkhwa province of Pakistan. This research project explores what an Islamic university is and how it can fit in the context of the mountainous Kunar Province of Afghanistan, combining notions of contemporary Islamic architecture, planning of universities as minor communities as well as cities based on Islamic principles.