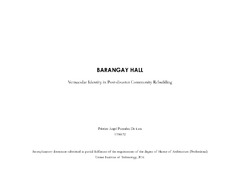 The 2012 Typhoon Bopha devastated the Mindanao region in the Philippines; in particular is in Barangay Andap, New Bataan, Compostela Valley- a community that was fully wiped away as a result of the debris flow from the surrounding mountain ranges. Almost four years since the typhoon, the Barangay is in the rebuild process. Although shelter has been provided, a place where the community can collaborate is yet to be explored. The office of the smallest political and administrative unit in the Philippines, called the Barangay Hall, has a functional language that is apt in promoting community rehabilitation. Often times, it is adjacent and/or connected to a day care centre, health clinic and local church; thus, answering issues of civic administration, religion, health, and education. However, its formal characteristics are often products of the economy and are quite alienated compared to the country’s rich heritage. As a quintessential Filipino building, it only makes sense to apply the country’s rich pre-colonial heritage in its architectural treatment. This design research aims to answer the question on how Filipino vernacular architecture can be applied in the design of a barangay hall, a typology that is highly associated with national identity, and utilise the design in reinvigorating a community that has been devastated and displaced by a natural disaster. This study emphasises the lessons from Philippine vernacular architecture and their suitability in a design that is culturally adapted and geared towardsdeveloping national identity. Concurrently, it utilises disaster mitigation methods and environmental considerations in providing a sustainable and resilient development. This method of combining history, anthropology, and environmental science is used to inform the architecture of a barangay civic centre,which is composed of the barangay hall, the local chapel, and the public elementary school.