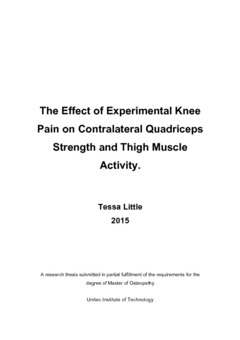 Little, T. (2015). The effect of experimental knee pain on contralateral quadriceps strength and thigh muscle activity. An unpublished research thesis submitted in partial fulfillment of the requirements for the degree of Master of Osteopathy, Unitec Institute of Technology, New Zealand.

OBJECTIVE: To determine the effects of experimentally induced pain on the strength of the contralateral quadriceps. METHODS: Fourteen healthy participants were recruited to attend two separate data collection sessions so that participants could be used as their own controls. The experimental condition consisted of hypertonic saline injection into the infrapatellar fat pad of the resting leg; isotonic saline was used in the control condition. Surface electromyography (EMG) from vastus medialis (VM), vastus lateralis (VL), biceps femoris (BF) and medial hamstrings (MH), and quadriceps torque measurements of the active leg were recorded during maximum effort isometric knee extension, which was performed before and immediately following injection. Quadriceps peak torque, maximum rate of torque development (MRTD), and the root mean square (RMS) of EMG signals from VM, VL, BF and MH were analyzed. RESULTS: Peak torque, MRTD and quadriceps RMS were significantly reduced following hypertonic saline injection into the contralateral infrapatellar fat pad. No significant changes in hamstrings RMS amplitude were seen following hypertonic saline injection. Isotonic saline produced no significant changes in peak torque, MRTD, or RMS of quadriceps or hamstrings. CONCLUSION: The findings of the present study suggest that increased nociceptive output from the knee joint contributes to contralateral quadriceps muscle inhibition.