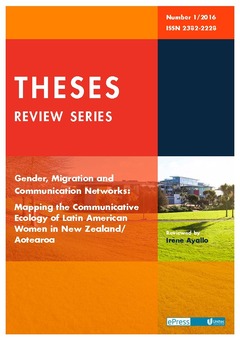 Hoffmann Nunes, L. (2016). Gender, migration and communication networks: Mapping the communicative ecology of Latin American migrant women in New Zealand /Aotearoa. An unpublished thesis submitted to the Department of Communication Studies in partial fulfillment of the requirements for the degree of Master of International Communication, Unitec Institute of Technology, New Zealand.

This study focuses on the narratives of Latin American migrant women in New Zealand and the role communication networks play in their migration experiences. Communication networks in this case include the formal channels they use (women’s associations, organisations and professionals whose roles include migrant support; culture and language maintenance groups, child care and education organisations and playgroups, and business associations); and the informal and personal connections they have (family, friends and community). These networks can be both online (websites and social media) and offline (face to- face meetings and events) and supported by more traditional media such ethnic media. This was a qualitative investigation, conducted under the oral history and communicative ecology approaches and informed by a feminist theoretical framework. This meant respectively the collection of their narratives and the use of migrant women’s voices to understand their self-development in a gendered and multiethnic society. Communicative ecology mapping involved identifying the use of various communication channels and the environments and the flows of information these migrant women engaged with in Aotearoa/New Zealand. In order to map their communicative ecology, I used the methods of focus group discussions, oral history interviews and participatory photography, in which the participants were invited to tell their own stories through images taken and chosen by them. I also collected images from the Facebook pages I was directed to by the participants to enhance the mapping process with visual evidence. The goal was to pursue a thorough understanding of more authentic personal narratives. Also, it enabled relationship building in which it was possible to explore topics that were relevant for both interviewer and interviewee. The findings indicated that formal and informal networks presented different uses and functions. Formal networks were comprised of women’s business meeting, mother’s groups, Latin American and ethnic diverse playgroups, day care, job mentoring programmes, immigration advisors, English classes, psychological and religious assistance, social and cultural activities and festivals, and conferences and training for professional development. Informal networks involved family in their home countries or New Zealand, Latin American and non-Latin American friends, including groups of female friends. Community included groups of women in yoga and dance classes, neighbours, not-for-profit activities, community businesses, church, dancing clubs, fundraising events as well as cultural and sports gatherings. This study demonstrated the existing complexity and interrelationship between the communication networks and the feminisation of migration. Migrating to a more multicultural and gender egalitarian country such as New Zealand facilitated these women’s empowerment. By actively establishing their formal and informal networks, they were able to renegotiate their gender status and roles within private and public spheres. Also noticeable was the importance of ethnic female role models and the growth of ethnic female entrepreneurship and leadership within their communities. Communication networks were also linked to ways of overcoming acculturation challenges and maintaining their culture and language within a gender basis. The participants felt more comfortable with their co-ethnics and shared support with Latin American women to strengthen their femininity, which they considered an attribute of integration and success in the host society. Ethnic media was mainly important to the Brazilians. Some women of this study took the lead to engage and support the voices of the Brazilian community through its online magazine. The use of online and social media facilitated and enhanced their transnational ties and established connections within the host society. They also used them for business purposes and to consume news from their homelands and New Zealand. Migrant women’s groups on social media played a significant role in the support and empowerment of themselves and other women. In conclusion, the communication networks of Latin American migrant women in New Zealand served as women’s empowerment, emotional and professional support, to help with their motherhood challenges and to develop their leadership skills and to set up their own business. Most of all the women of this research project said they left behind a feeling of loneliness, isolation and homesickness and found themselves more established, happier and at home in New Zealand.