How is the servant-leadership philosophy incorporated in the corporate culture of a culturally-diverse retail company in New Zealand? : a case study approach 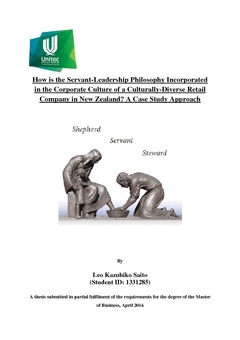 Saito, L. K. (2016). How is the servant-leadership philosophy incorporated in the corporate culture of a culturally-diverse retail company in New Zealand?: A case study approach. An unpublished thesis submitted in partial fulfilment of the requirements for the degree of the Master of Business, Unitec Institute of Technology, New Zealand.

The word ‘leader’ is often heard or seen, and even overused, to simply refer to senior managers of organisations, in which case it is more concerned with their position or rank in the organisations, rather than with the question of whether or not they are leaders in terms of quality. To be precise, they should be called “managers” in this context. Leadership is about influencing others to willingly and enthusiastically direct their efforts and abilities towards attaining defined group or organisational goals; and thereby eliciting extraordinary performance from ordinary people. Leadership is needed throughout an organisation at every level regardless of position and rank. From a number of different leadership options, this research is particularly focused on servant leadership (SL) while aiming at examining its effectiveness in a large-scale, culturally diverse business organisation that operates retail stores across New Zealand. The CEO of this organisation is recognised as a prominent servant-leader in the country’s business circles, and the research was conducted on the assumption that the organisation might well have embraced SL. The survey results show that SL is embraced and that the majority of participants have a positive slant on SL. To measure the effectiveness of leadership, this research determines ‘motivation’ and ‘commitment’ as the key indicators. The vast majority of responses indicate that SL motivates the participants to face and overcome challenges and go beyond their differences to cooperate with their supervisors and co-workers as they move towards the organisation’s common goals. SL attracts a number of negative views, many of which are due to misunderstandings or to the attitude of “judging a book by its cover”. However, some others should be acknowledged as a warning, particularly those that point to pertinent “side effects”. SL may cause followers to become overly reliant on the leaders and unwilling to take the initiative. This should be avoided at any cost. The leaders need to bear in mind that SL does not literally entail the leader taking on the role of a servant, rather it represents a blend or balance between leader and servant; the leader never loses leadership qualities while being a servant-leader.